What’s the best HDMI splitter for Amazon Fire Stick? First off, an HDMI splitter is a method of splitting the HDMI connections of a media source so that it could connect to multiple TVs, monitors, and/or projectors at the same time, resulting in mirrored displays for all. Meanwhile, the Amazon Fire Stick is a streaming device that makes it easier for you to watch streaming content as opposed to television content you get via satellite or cable.

As for the best HDMI splitter for Amazon Fire Stick, we recommend the OREI HDMI Splitter for Full HD 1080p HD-102. Ostensibly, it’s one of the best splitters out there for you to enjoy your Amazon Fire Stick on multiple monitors, multiple television sets, multiple audio setups, and multiple projectors. It could also cater to a mix of TVs, monitors, stereo systems, and projectors as your home cinema or home entertainment setup require.

What Is an HDMI Splitter?

What Is The Amazon Fire Stick?

The Amazon Fire TV Stick or Amazon Fire Stick is a device that’s similar to other home entertainment streaming tech.  It’s something you can easily plug into the HDMI port of your HDTV. It plugs into the HDMI of your TV in order to give you access to your favorite games, photos, music, subscription services, TV shows, and movies. This device houses all the content you love while being easily transportable. This way, you can enjoy watching most anything while taking your media anywhere you go, whether it’s while traveling on a car or moving from room to room in your home.

What Is The Best HDMI Splitter for Amazon Fire Stick?

The best HDMI splitter for Amazon Fire Stick is the OREI HDMI Splitter HD-102. We believe this is the case because it’s a simple type of splitter that anyone can operate. More complicated splitters tend to have lower ratings on Amazon because of how hard it is to deal with compatibility issues. OREI at the very least fulfills its promise of splitting the HDMI signal into two displays that are identical to their input signal. Here’s what OREI brings to the table. (see full specs) 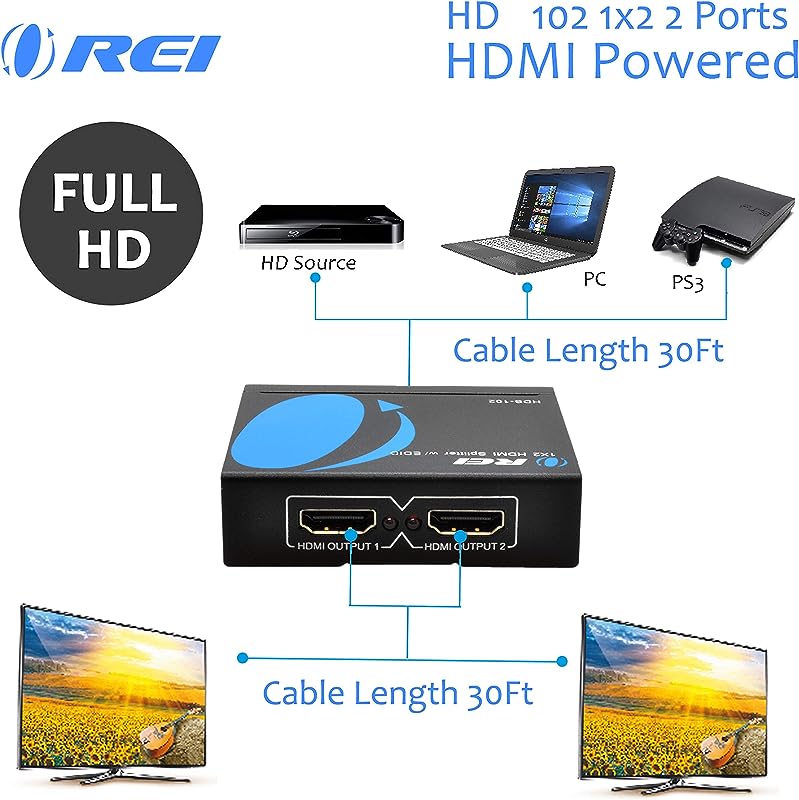 The entire point of getting an HDMI splitter for Amazon Fire Stick is to be able to connect multiple devices to your Fire Stick so that you don’t only have one TV to watch it with. Now anyone within the vicinity of your Fire Stick can connect to the streaming device so that multiple rooms, audiences, or families can enjoy the best streaming programs that the Internet can provide. The Fire TV Stick comes with a USB cable, HDMI extender, power adapter, and remote as well as 2 AAA batteries and a guide. The splitter can connect to it with an HDMI connector of its own that can split into multiple display devices.