Which is better? HDMI or component video? That’s the great debate right there that continues to this day even as the decade closes with HDMI being the current standard in HD audio-video transmission. Many people ask the question or regularly debate HDMI vs component (YPbPr).

Why is that anyway? Is it because a component is capable of delivering standard definition (SD) and high definition (HD) signals, so many component video holdouts resisted switching to HDMI when this debate started? Before HDMI really started taking over, the component did offer quite the impressive quality leap without shifting to a new HDMI-only port.

Here are a few details on the differences of both before getting to the nitty-gritty of things. At any rate, let’s dive deep into the debate by defining both formats and going from there. 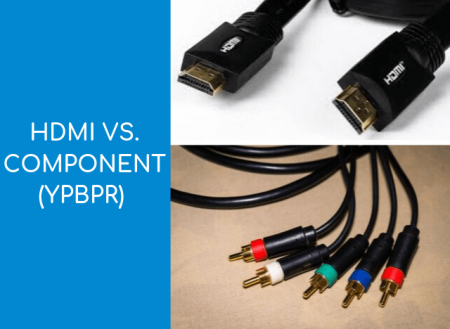 On the other hand, legacy systems with component cables are still in use even today in order to view a 1080p resolution videogame, movie, or show. Streaming is done at 1080p still, not 4K to 8K video with dizzying 60-180 Hz refresh rate. Many media players still stick to the 1080p ceiling and only certain users and companies are releasing content for 4K to 8K video. However, the time for the component has nevertheless clearly passed, especially in light of its need for separate audio connections. HDMI is the future and component video is the past.

You’d think the fact that component cables don’t carry sound while HDMI does would mean the end of the debate, but component video supporters would argue that they don’t mind having extra audio cables paired with component cables. Is it the price? HDMI cables have dropped in price significantly that you can buy either that or component cables with little difference in terms of cost. Even if HDMI cables cost a little more, it’s more than worth it to be able to play 1080p HD as well as 4K or 8K video.

Nevertheless, it’s also true that HDMI and component video outputs for 1080i or 1080p remain the HD that most people are familiar with and most people avail of, 4K and 8K video aside. In that specific metric, component and HDMI are equals. Outside of it, 10 years later, HDMI 2.0 and 2.1 blows component video quality out of the water.