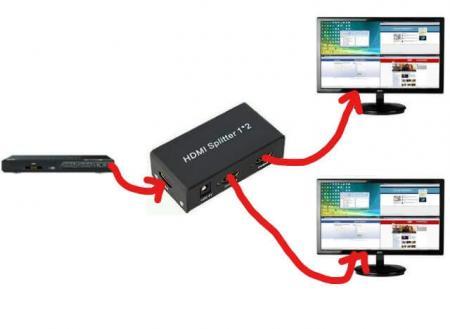 Can you connect two monitors to your computer using an HDMI splitter? Sure, but it depends on what sort of dual monitor setup you want to do. Your PC or laptop usually only has one HDMI output linked to your graphics card. Ideally, you should have monitors that are the exact same. However, it can get quite problematic if you want to go extended mode on them. Mirroring the same output on two monitors is the likelier possibility. Having both monitors double the width of your screen with a splitter is a bit more issue-laden and complex with HDMI.

Here’s the deal on how to set up dual monitors with HDMI splitter. You can do it, but HDMI splitters merely supplicate the screen so that you’ll get the exact same output on two screens. If you wish to extend your desktop for the sake of editing videos or doing graphic design, you’ll need a dual output graphics card that supports DisplayPort 1.2 to allow chaining monitors together from a single DP output. You need specific devices like the right graphics card and a lot of know-how in order to make an HDMI-based dual monitor work.

If you want to merely mirror video output on two different monitors, you can use HDMI splitters and the right graphic cards to accomplish this end. However, you can’t simply use just any splitter. You need one that works excellently for the least amount of money to ensure that you’ve gotten a cost-effective investment when push comes to shove. In this article, we’ll cover why finding the right splitter is kind of complicated and learn what to look for when it comes to HDMI splitters and cables.

What is an HDMI Splitter?

An HDMI splitter is a device that splits the HDMI video output from a device such as Roku, your laptop, a Blu-Ray or DVD player, a cable box, or a game console (such as a Nintendo Wii, Wii-U, and Switch; a PlayStation 1-4; or an Xbox, Xbox 360, or Xbox One) to allow two separate streams. Typically, a splitter splits the audio stream with a video stream. In this instance, it’s about splitting or mirroring the video signal into two separate monitors instead. It’s one video feed split into two so that it can accommodate two monitors.

Alas, many splitters aren’t dependable for this job. Some are adapters for legacy monitors while others simply don’t work at all. Still, others have issues due to the anti-piracy measure built into all HDMI hardware known as High Bandwidth Digital Content Protection (HDCP). HDCP is what keeps splitters from splitting the video stream into a separate monitor for fear of digital piracy or recording the feed. Only approved HDMI hardware can receive the signal from one HDMI source device to another HDMI display.

HDCP is the Problem With HDMI Splitters

Streaming devices that use HDMI such as HDTVs, cables, and so forth all have HDCP. In fact, HDMI might have been promulgated by the different companies back in 2002 specifically because it’s so anti-piracy. It has since replaced various older formats such as VGA, coaxial, and so forth as well as overtaken other HD formats like Digital Visual Interface (1999) and DisplayPort (2006). HDCP safeguards against people recording the digital data just short of simply recording the monitor itself.

You do have a fallback when it comes to dealing with your HDCP blues. You need to specifically find splitters, switchers, matrix switchers, adapters, and converters that are HDCP-complaint, such that the device makes the HDMI signal from your device HDCP-approved. However, this typically involves falling back to a lower resolution like 720p if the equipment isn’t a complaint. There’s a downgrade to allow the delivery of the signal.

Is Splitting an HDMI Signal Illegal?

It’s only illegal to split an HDMI signal if you’re planning to use it to illegally copy and distribute HD content. If you instead wish to do it for the sake of mirroring your display unto two monitors or extending your display to two square monitors to form a cinema resolution screen without letterboxing then no, it’s not illegal. You can even record content by you playing videogames for your Let’s Play channel or making legal backups that’s your own properly.

You can also record copyrighted content for fair-use applications, like making a video parody for YouTube or something. It’s only illegal if you’re pirating content. At any rate, if you’re mirroring content between two monitors, you should use an HDCP-compliant splitter or a cheaper splitter that activates the fallback mode. Otherwise, for desktop or movie screen extensions, you need a dual monitor graphics card and/or DisplayPort 1.2 hardware to allow you to daisy-chain your HDMI monitors together with a DP-to-HDMI adapter setup.