Does the VGA splitter allow you to get an extended desktop? Yes and no. Here’s the deal. There’s software that allows you to extend your desktop, whether it’s from the operating system itself to an app or through the hardware having a setting allowing for the desktop extension. More often than not, a video splitter displays the same image on two or more monitors. You need a video card with multiple video outputs to work in tandem with your splitter.

Usually, the splitter itself can only at best duplicate or mirror the same desktop or user interface. Back in 2012 in fact, when Windows XP was the predominant operating system of the world, splitters don’t extend desktop apps on their own. They needed video cards with desktop extension services to enable desktop splitting to happen.

How to setup dual monitors with one VGA output? 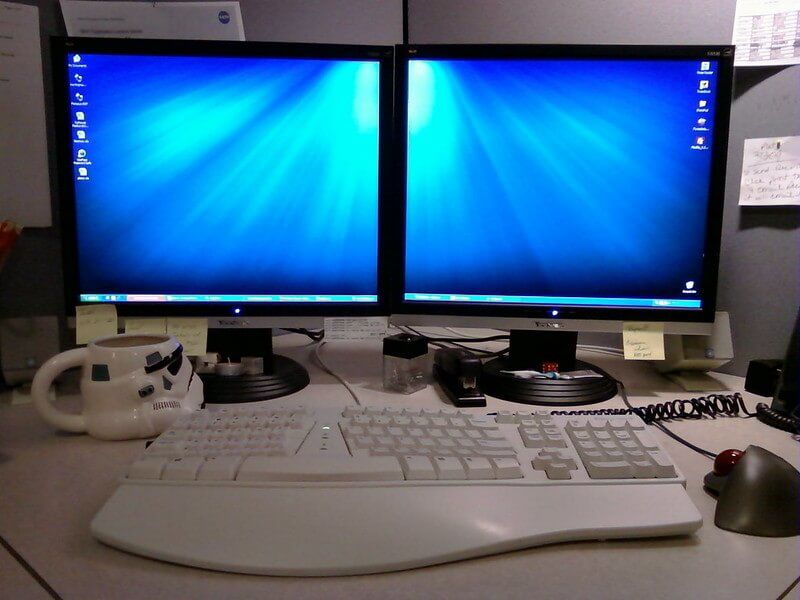 The Video or Graphics Card and VGA Splitter Combo

You need more than the VGA splitter and at least twin monitors to do the desktop extension. You also need the right software and a compatible video card to allow the splitting to take place. Otherwise, the most you’ll get is screen mirroring or duplication from your splitter. Once you’ve got a video card, a VGA splitter, and monitors for the task, then you can do screen extensions or toggle between single screen, split-screen, and desktop extension modes on and off.

There are PCs that have VGA, DisplayPort (DP), DVI, and HDMI ports on them, but those are rare. It’s usually VGA and HDMI, DP, or DVI. You might need splitters for HDMI, DP, or DVI, but for the purposes of this article we will cover the VGA ones. Also take note that many motherboards include integrated graphics that can only run single monitor or dual monitor setups. Check the specs of your PC if dual monitor is even possible, although many modern PCs have this as a default extra option.

You can access this by going to the BIOS and selecting Configuration, Video, Integrated Graphics Device, and activating the “Always Enable” option. Also, as much as possible, use the same type of monitor to do your Desktop Extension. This way, you won’t end up with the wrong resolution on the differently sized or proportioned monitor or have to go through hoops to change the resolution on your second monitor compared to your main monitor. Keep things simple. In the case of this article, choose VGA-type monitors that are either both CRTs or both LCD flat panel HD monitors. 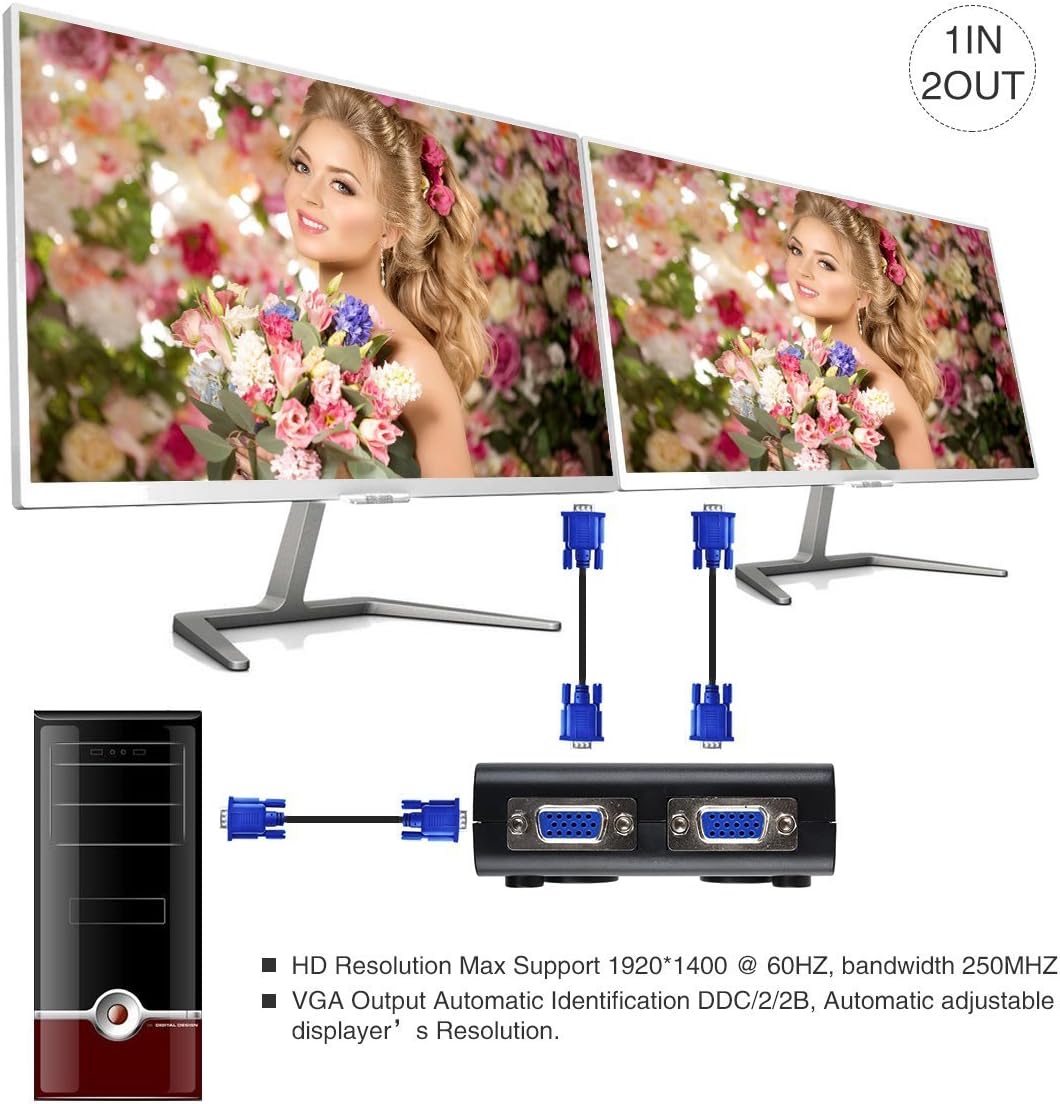 You can also avail of a VGA Y-Cable that allows 2 monitors to link up to a single card. They’re usually available online after some casual Google searching and Amazon shopping. They’re also available in Dell branded machines in case you’re curious where his type of hardware is usually seen in brick-and-mortar stores. Some Dell PCs have a special driver and cards to support dual VGA monitor functionality for Windows XP and above. However, many modern machines are also dual monitor ready, but this time for HDMI-type flatscreens.

You also need compatible monitors and drivers for good measure. You also need that VGA splitter in case you only have one VGA port. If you do everything right, you should end up with something that doesn’t lag much or cause errors. However, some video cards can only support mirroring instead of desktop extension, so you’ll need to get a video card upgrade that your motherboard can support to get that dual monitor setup going.

The best way to deal with Windows 7 monitor issues is to have a graphics card with 2 outputs for VGA. With that said, even if you have a discrete graphics card, it doesn’t necessarily mean you can use all ports at the same time. There are certain older Nvidia cards that are unable to use 2 monitors on the same card, even if there are 2 ports available. Check the name of the card by going to Control Panel, Device Manager, and Display Adapters then going to Google to see what monitor setups can be used with it,  like a dual monitor setup for Nvidia GTX 1660.

Afterwards, press the right or left arrow key. The left key shows the active program window on the left side of the screen. The right key shows the active program on the right side of the screen. You now have a split screen. To get out of this mode, simply maximize one of the program windows through clicking the maximize icon on the top-right corner of any given window.

First off, on the desktop, right-click on an empty area where the wallpaper is. This will result in a drop-down menu where you can select the Display settings option. Afterwards, scroll towards the Multiple Displays section and look for the option that allows you to extend displays. Remember that you should have the second monitor available and running through a splitter at this point as well as a video card that allows you to do monitor extensions for your display.

When turning off your extended display, you need to select the Show Only on the options portion, which depends on which screen you wish your display to get displayed. You can also press the Windows Key and the P Key together to click the Extend Option as a hot key or shortcut of sorts. It turns on or off your extended display option automatically. This shortcut is also useful to select the PC screen only display to toggle between a primary and secondary monitor.

Select the Duplicate These Displays option so that each of your monitors can display the same screen. For many splitters, this is the default setting. In other words, you can plug-and-play your extra monitor as a mirror of your laptop or PC desktop. Otherwise, you can select the option manually on your own. It’s the Extended Desktop or Display option that requires you to actually tinker with your settings more often than not. You can also duplicate, turn off, or select monitors using your hot keys during presentations and whatnot.

Click Display Settings instead if you’re using Windows 10. From there, you can configure your screen settings and options for multiple monitors for your operating system, which should also include desktop extension. It’s also through this app that you can confirm if your computer recognizes 1, 2, or more monitors. You can’t have a dual monitor setup unless the OS itself knows you have multiple monitors installed, which is sometimes not the case even though the second or third monitor can easily duplicate the same signal through the splitter. The extra display might still be read as one monitor because it’s using one signal split into multiple displays.

The drop-down menu on the app allows you to pick whether to extend or duplicate your desktop. In the majority of multiple monitor rigs, you’ll wish to extend your desktop across all 2 or more displays to allow for things like easier video editing, easier graphic design, or easier gaming in a truly immersive type of environment. Video cards like Nvidia and AMD can also allow you to setup your dual screen configuration through the Control Panel of your GPU. Choose your Control Panel for AMD or Nvidia then find the display section. This allows you direct card and display access outside of the OS.

It’s not enough that your extra monitor or monitors are duplicating the same screen as your main monitor. You need the graphics card to realize that the additional display is there in the first place. This way, you can make your videogame experience a lot more immersive than normal, especially if you angle your dual or triple monitor setup in a way that encompasses all angles of your FPS game. In editing videos, creating graphic design, or even writing documents, it pays to have a larger-than-normal user interface for all your tools or timelines to be visible all at once without toggling between them on your taskbar.

What Is Desktop Extension Good For Anyway?

When working with a computer for things like graphic design, document-making, or video editing, it pays to have more than one screen available or to have a longer, bigger desktop real estate. You can open multiple applications or documents at the time for multitasking purposes or as side-by-side split-screen. In Windows, you can do this with a single monitor through the split screen feature. However, if you have an extra monitor, you can instead extend the screen and desktop to those two instead of merely duplicating the

In video editing in particular, you can have the final video available on one screen while the timeline of edited clips are extended in the other screen. Or you can view the whole timeline through a two-screen or three-screen type of setup. In videogames, an extended desktop also allows you to see the action in multiple angles, leading to immersion that rivals that of Oculus Rift VR headsets. A wider screen, if you have the video card and splitters for it, enables you to work with a bigger user interface, allowing you to do thing you couldn’t normally do, like multi-task between typing and browsing without minimizing any windows and whatnot.